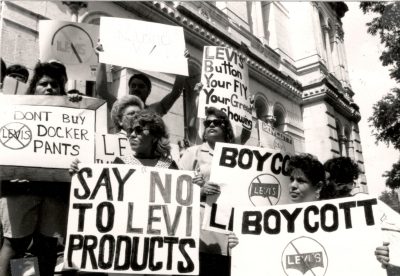 Presented by The URBAN-15 Group at Online/Virtual Space

In honor of Labor Day, Hidden Histories will explore two critical worker histories in San Antonio. First is the impact of federal jobs creation programs for working artists—from the WPA projects of the 1940s which created some of the city’s best known landmarks to the CETA program of the 1970s and 80s, which allowed the Carver Community Cultural Center to hire 30 local artists to provide free performances and education to long-neglected schools and neighborhoods. Another pair of interviews honors the legacy of women’s skilled labor and organizing power, with Sylvia Reyna of the San Antonio Public Library’s Texana Department discussing the “labor” history held in the library’s collection of midwifery records and Petra Mata and Viola Casares celebrating the 30-year anniversary of Fuerza Unida, founded in 1990 when women workers rose up to protest the closure of three factories on San Antonio’s Southside. Finally, continuing our homage to Studs Terkel’s Working, we present a new collage of short film interviews with a range of San Antonio residents on one question: What was your first job?

As a grassroots media project that pursues and preserves the underexplored stories of South Texas, Hidden Histories is proud to have recently received a Humanities Texas Relief Grant for this work. This summer, Humanities Texas awarded over $1.1 million to Texas nonprofits that suffered losses as a result of the COVID-19 pandemic. Recipients include museums, libraries, preservation organizations, heritage and cultural centers, and community-based arts groups like URBAN-15. At a time of threatened public funding for arts and culture, this critical support allows us to continue uncovering important cultural histories of the region.

All episodes of Hidden Histories debut on the first Monday of the month, and can be viewed online for FREE on our Facebook page (facebook.com/urban15/live) OR on our website (urban15.org/live-stream). Afterwards, episodes are re-streamed each Monday at 7pm throughout that month and are also archived online for 24/7 access at http://hiddenhistories.tv/archives/.

For more information on the series, visit http://hiddenhistories.tv